More About the Language of Love

It didn’t take long to find accounts of the porn business which underlined its appropriateness for my project. Andrea Dworkin does a real job on adult entertainment in her Pornography: Men Possessing Women (New York: G. P. Putnam's Sons, 1981). The former Linda Lovelace gives an insider’s perspective in her autobiography Ordeal (New York: Kensington Publishing Corp., 1980). Pornographers and their defenders would rush to refute these but MRDA. In any case, I wasn't looking for a balanced evaluation of the industry. I was writing an image of hell. I chose stories which helped my project. Different animals, researching a play and researching a thesis. I’m not here to prove or argue anything, I’ve come to show.

Set in Los Angeles, city of the lost angels, in the 1980s, More About the Language of Love tells the story of the making of a hardcore pornographic film.

Gradually it becomes clear to even as naïve and blind a soul as Saul that Mundy's money-making paradise of earthly delights is everyone else's hell on earth. 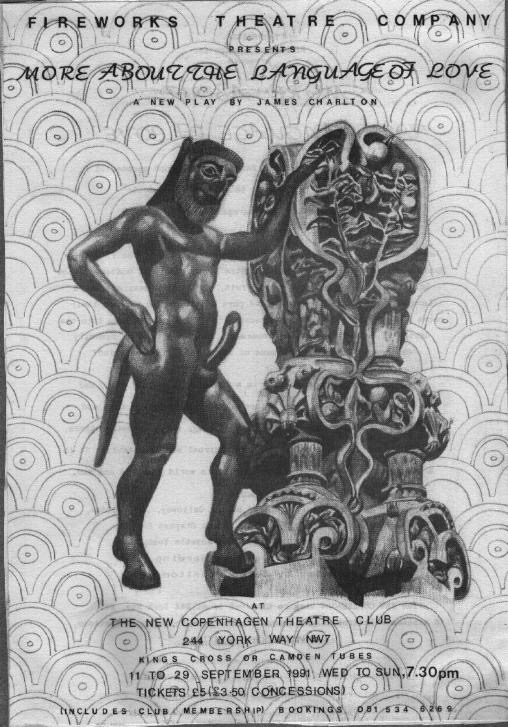 “'Scabrous' is too pretty a word to describe More About the Language of Love. James Charlton's play follows the filming, over four days, of a low budget hard-core porn movie. Producer Rex Mundy (geddit?) hires Hollywood hopeful Saul to direct. Saul's porn debut stars has-been Tab Barton and Lance Longstick, a gay porn starlet going straight for the duration. The movie's female leads are taken by Cleopatra Lamas. an “old black whore” of 28, and by wide-eyed ingenue Jumper Fruit. The cast receives an unexpected boost when Chuck Powiss offers the services of his porn-superstar wife Laura Lovejuice… There are two languages in More About the Language of Love: the language of pathetic prima donna-hood from those in front of the camera, and the language of hatred from the men behind it. The second mainly comprises a vengeful incantation of names for the women. the organs, and the actions being filmed. The movie is less about sex than about sexual infliction. 'l love you, you fucking sow". shrieks Chuck Powiss as he watches his wife's degradation…. Allegorical, Commedia-style make-up is much in evidence. Horn-haired and black-lipped. David Nott plays Rex Mundy like Divine in mayoral mode, rasping out his creed from somewhere around his waist-line. "This is a graveyard!" cries one character, a view borne out by the many chalk white faces on stage. Hamish Galloway bows and scrapes obscenely as Saul Corroda, and Lance Longstick is finely played by Leighton Carter as a cross between Andy Pandy and Blanche Dubois. The acting, apart from occasional struggles with Americanese, is very strong all round. Anna Mana Coombes (says the programme) took on the role of Jumper at short notice "after another actress couldn't stand the heat in the kitchen". While Ms Coombes acquits herself with skill, style and courage (as do her female colleagues), it isn't hard to sympathise with the woman she replaced… I came to More About the Language of Love half-expecting a facile and exploitative exercise in shock (perhaps because its author is male). It may be all that, but it undeniably kicks liberal complacency and knowingness right in the baits. Whether the explicitness with which it does so is necessary seems arguable; the censored. mainstream Mona Lisa managed to leave little enough to the imagination. At certain point, exulting in savage indignation becomes a mere thrill In itself, and this play comes too close to that point for its own good. The police now show bloody trauma videos to joyriders. This play could serve a similar purpose for devotees of porn. For others, it's like-ty to be just depressing and morally redundant. These are Indelible and demeaning images. If you don't want, or don't need them tattooed on your imagination, don't go.” – Sam Willetts, What’s On

"Swop 'language of love' for 'ins and outs of skinflicks' and you'd be a lot nearer this three-hour nightmare written and directed by James Charlton. Set on a day's location shoot in seedy LA where naive film directors and hungry no hopers give their naked all for a few dollars more, Charlton's play takes us through just about every sordid sexual 'wet beaver' antic in the porno book. Characters range from sweaty amoral porn king Rex Mundy to mindless 'mouth girl' Laura Lovejuice with 12-inch, mincing Lance Longstick in between... a no-holds barred exposé of the moribund side of the '80s — with all its soul-selling greed and AIDS-induced 'look but don't touch' sex mentality — turned belly-up for inspection... full marks to the ten-strong cast for keeping up the energy." - Paula Webb, Time Out
[Time Out critic Paula Webb approached the author at the interval to ask him - "I'd like to ask you what you think you're doing with this play?" A number of years later, the author met Paula at a party for the TV soap opera, Family Affairs, that both of them were working on. Paula laughed when JMC reminded her of the review, and confessed that she hated More About the Language of Love more than any other play she reviewed on her years with Time Out…]