The World & his Wife

After juvenilia and apprentice work, if you’re lucky you’ll write something in your own voice. The World & his Wife was the first play that I really found what it was to write as JMC. It was the first play in what was to become my ‘World trilogy’ – three plays about the world, the flesh, and the devil. Three plays in which the characters existed in a world stripped of spirit, creativity, and agency. More About the Language of Love was produced next. Something in the Entertainment World has never been performed.

I’d written farces and discovered that I wasn’t Ben Travers or Joe Orton, nor did I really want to be. I’d played around with more ‘serious’ styles but they hadn’t panned out. Things weren’t good for me on a personal level. I was in a toxic relationship. I wrote a dialogue between a couple, full of rancour and recrimination, which might be funny or might not depending on your point of view.

I called the couple Mike and Christine, straightening my own gay experience but staying true to the way gender played out. I grasped at farce elements and twisted them: a vicar coming for tea and a snooping police inspector. I added for Mike the worst of friends, one Jim the Bin. I tipped in an ideologue, the feminist Melissa, who might rescue Christine. Smashing together these disparate elements, something new emerged. It wasn’t quite like any of its inspirations or influences. I’d written my own play.

I’d also laid down the problems that continue to haunt me to this day. My characters were vicious, exploitative, sexually profligate, or their victims. Ideological revolution seems to offer a way out but not really. The world continues to go round and around. Cycles of violence. I discovered later that William Blake saw all this in his Orc cycle.

The World & his Wife is profane and brutal. Mike and Jim talk in the vilest way. I return again and again to the ways in which men interact when there’s no one listening. The office workers in Fat Souls. Testy and Snide in Coming Up. The paedophiles in ecstasy + GRACE (Abyssinia). The Elector and his brother in Reformation. There’s a link with medieval drama. In Mankind we’re soaked in the reprobate antics of New Guise, Now-a-days and Nought.

I’ve produced the play a couple of times with my own theatre company. It’s had some great audience reactions and almost complete critical neglect. I’d produce it again tomorrow if I had the resources. It may not be my favourite child but it’s my eldest surviving.

Christine Mann is living a dog's life. Ordered about, verbally and physically abused and exploited by her husband Mike. Christine tries to confide her woes to her only friend, a Church of England vicar, Reverend Dick Woodger. He has problems of his own, living as he does a double life of respectable Church of England ministering and illicit promiscuous gay sex.

Christine's miseries are increased when a police detective, Inspector Ness, arrives. He is investigating a number of murderous attacks on young women committed by local serial killer, The Scissors Freak. Mike is a suspect. Ness appalls Christine by describing the Freak's killings to her in lurid detail. She is left reeling by the thought that the man she shares her bed with is not only a brute but a psychopath.

In her desperation, Christine contacts a long-lost school friend, Melissa. In the intervening years Melissa has dedicated her life to a particularly virulent and radical form of lesbian feminism. One look at Christine's situation and Melissa announces that there is only one solution to the problem of Christine's marriage: the revolutionary overthrow of her oppressor and the institution of a new state of being.

Will Mike's expulsion from the house and his replacement by Melissa bring Christine the loving new life that she craves? 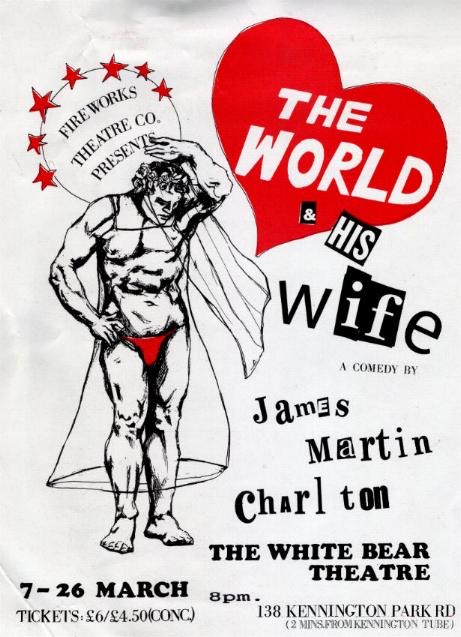 “Theatre can be a bit, er, theatrical: you know, luvvies with posh booming voices striding around the stage waving lace handkerchiefs and suchlike. Well, The World and His Wife is different. It's like a sitcom, only funny, mad and realistic all at the same time. Mike and Christine Mann are Mr and Mrs Happily Married; Mike falls out with Christine, Christine turns to the vicar who turns out to be a bit of a closet, Mike is suspected of being a serial killer and Christine ends up in cahoots with her lesbian friend Melissa. Terry and June it ain't.” – Boyz

"Mike Mann is the quintessential unreconstructed heterosexual lout ranting incessantly against women's inability to satisfy his fantasy of a doting mum with sex appeal. His cruel abuse of doormat wifey Christine is an obvious condemnation of unprocessed misogyny. And sex mad Inspector Ness and drunken shagging mate Jim are just as bad. Yet writer James Martin Charlton seems to delight in parading their brutality, attempting to pass off even a wholly offensive detailing of a sex attacker's mutilation of women as a post-modern comic turn. No amount of camp buffoonery from gay Reverend Dick Woodger, ecstatic revenge from lesbian feminist Melissa or dippy niceness from downtrodden Christine can balance the show and catch the PC message... a desperate shock tactic display of fancy dress and naked bollocks... this is woefully immature theatre that's neither funny nor clever.” – Paula Webb, Time Out [Paula was always JMC’s biggest fan…]